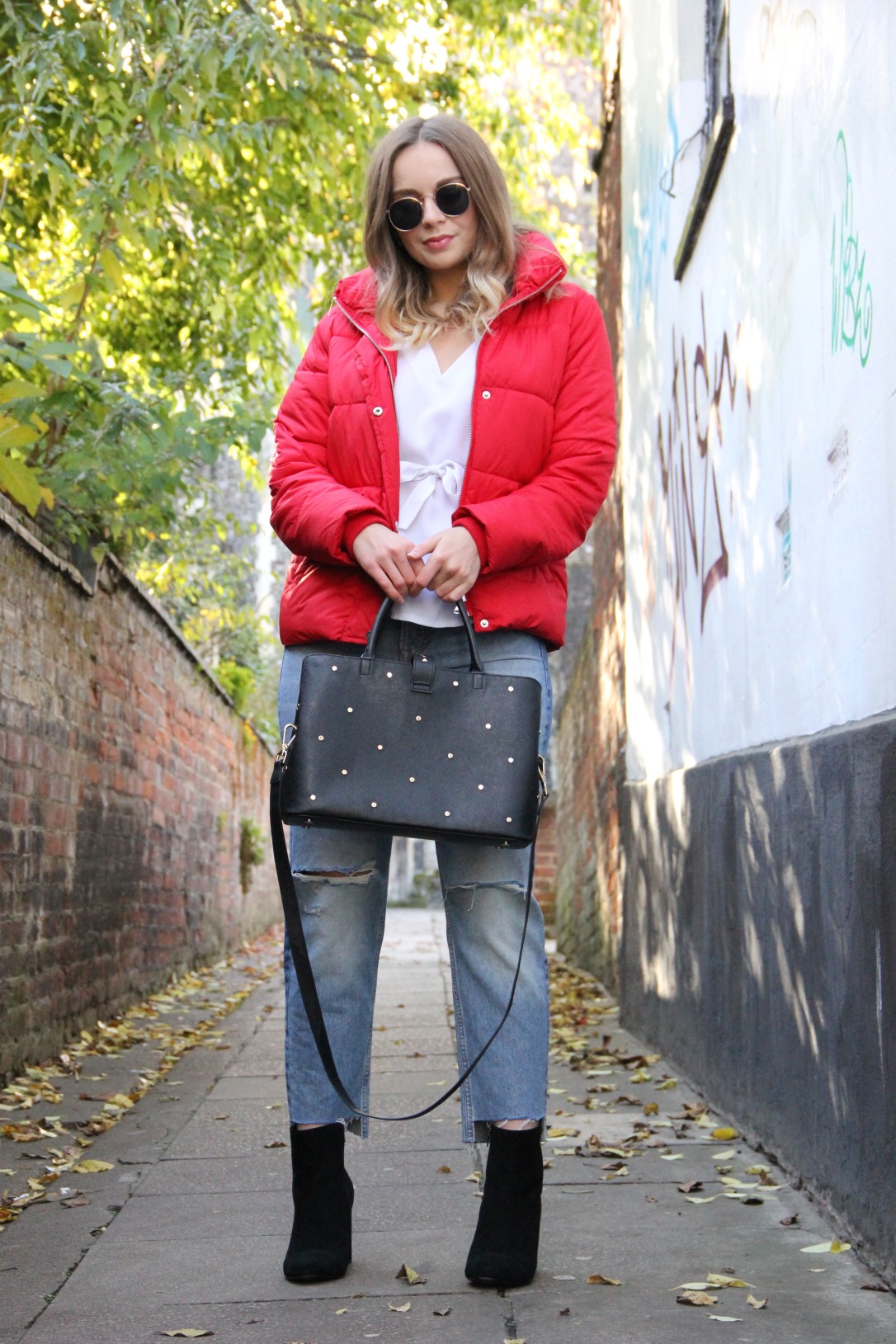 I’m doing that thing again – the thing where I convince myself that every outfit post has to have a deep and meaningful element, or some kind of insightful purpose, or just a ‘point’ beyond what I’m wearing. Beyond the fact that they probably don’t have to have those things, this seems a little rich, particularly considering that most of the time when I’m writing on a subject that isn’t the outfit, I’m none the wiser to what the ‘point’ of what I’m saying is anyway, so I can hardly claim that I have any profound messages to share with the world.

I think I must get so fixated on this because my very favourite outfit posts are nearly always the ones that are actually saying something a little more meaty than just talking about the clothes, because let’s face it, clothes are very interesting if you’re into them but they’re not that interesting. When I started reading and loving blogs, they weren’t necessarily about making ‘points’ though – they were literally saying ‘here is what I bought or what I own or what I wore and here is what I think of it’.

I think it’s great that topics have broadened somewhat since then and bloggers are having their say on all manner of subjects, but I do still read and very much enjoy loads of classic ‘here’s what I’m wearing’ posts on a daily basis, so I don’t know why I get so easily suckered into thinking I need to make some grand statement each time.

Musings on any aspect of life might be my favourite posts to write, but for one thing, I just don’t have all that many grand statements to make, and for another, a bit of light relief is probably what you need after reading me whine on about perfectionism or weight gain all the time. A nice, back-to-basics interlude, if you like.

In the spirit of bringing you an outfit for the outfit’s sake, here is one, and the ‘statement’, in a sartorial sense only, is probably the red puffer jacket, no? I’ve never really liked these jackets until this year (one of those things I thought looked great on other people but absolutely ridiculous on me) but I was quite taken by this little red number because it looked so fun and playful, so picked it up from Matalan for the princely sum of £20. 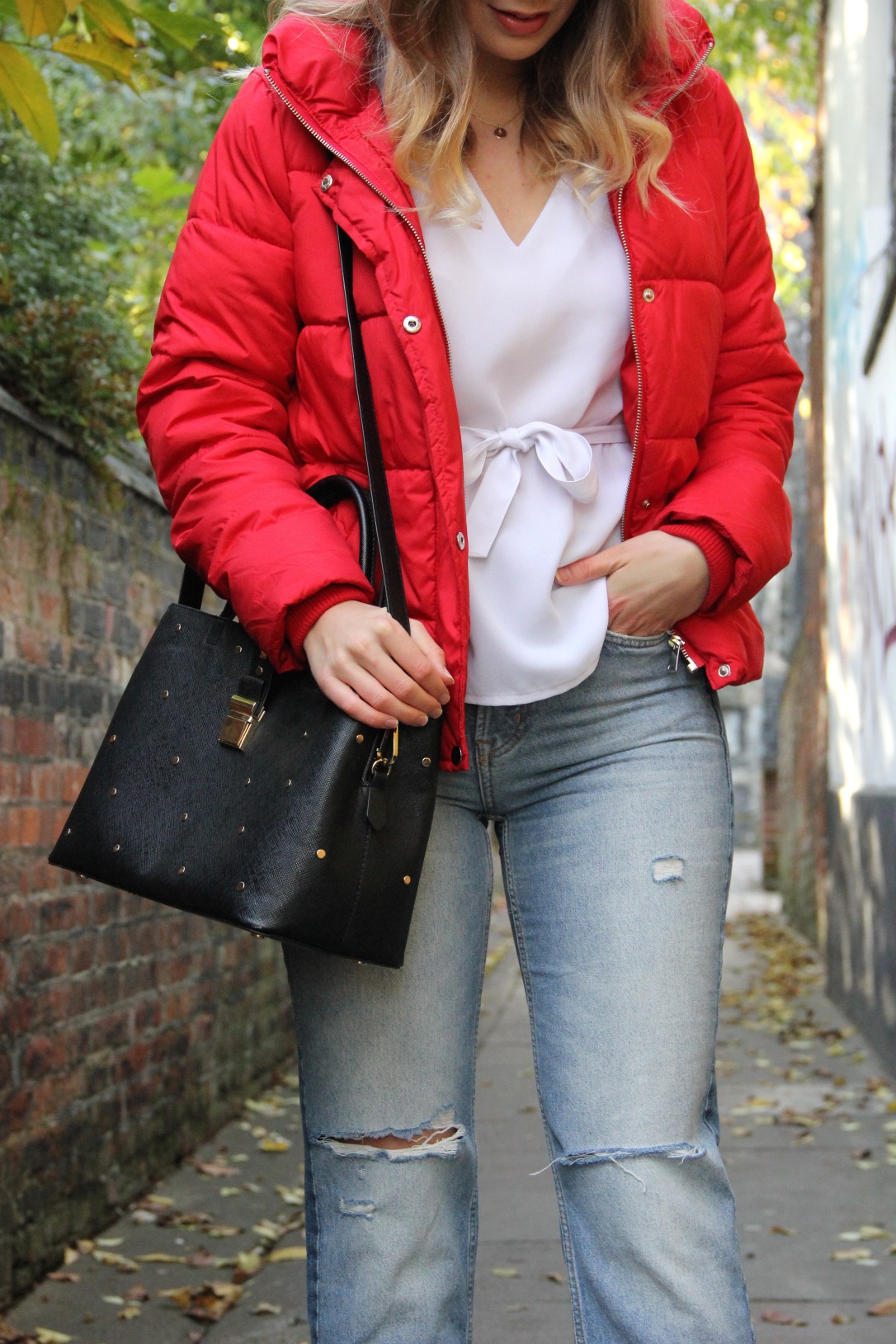 It’s a bit like wearing a duvet, which I’m very happy about, and has been the most wonderful companion on Saturday morning walks to the gym. Because it’s so comfortable I’ve been inclined to throw it on over more formal (or at least less ‘I’ve just got out of bed’) looks too, which is how this outfit came about. The jacket looks perfect with trainers and jeans and they were the obvious combination, but in this case I love the contrast of it with heeled boots and the tie-waist white top and how it gives the very unsporty outfit a little sporty edge.

I stuck with jeans on the bottom half so that this pair I picked up in the H&M sale could make their first appearance on the blog. I can’t get enough of that panelling and stepped hem so I think you’ll be seeing them a lot on here in the future (particularly judging by the only other blue jeans I own, which have appeared in SO many posts now and I just hope you all don’t notice that I’m wearing the same pair yet again each time).

We took these shots on a Sunday morning where for once, I wasn’t feeling super stressed and rushed, and we were able to play around with what the sun was doing, which was actually a lot of fun. I’m pretty sure some kids laughed at me, but it’s all fun and games isn’t it? I must have been in a very good mood because it didn’t bother me in the slightest.

And that’s it – that’s all I’ve got to share. An outfit that I wore, liked and posed in the street in. A set of photos where my long-suffering photographer/boyfriend and I experimented with the light a bit and enjoyed both the process and the results.

There isn’t a point, really, besides saying that this is something I felt like posting – but does there really have to be? Here’s an outfit I wore…it involves a puffer jacket, are you a fan of them? 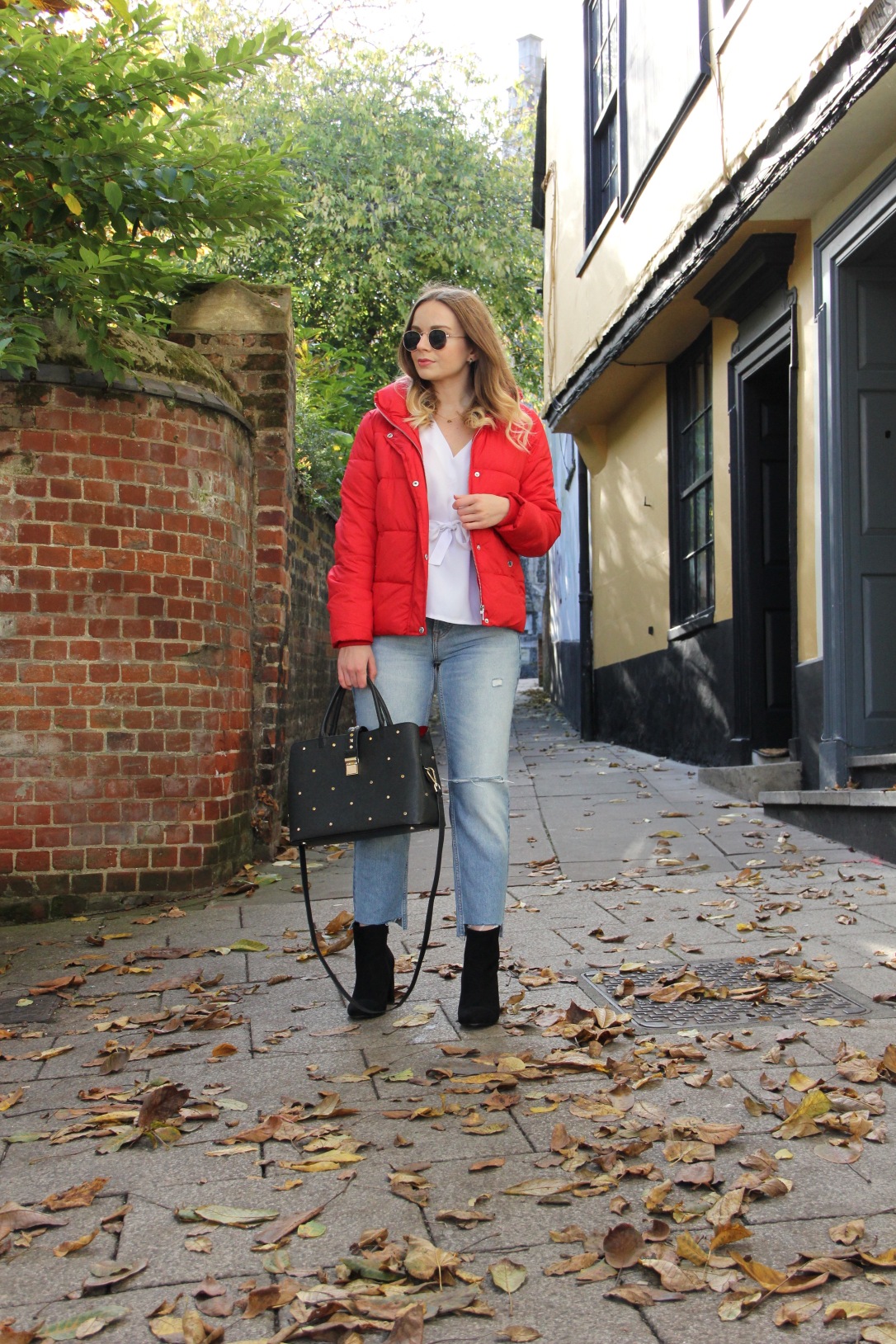 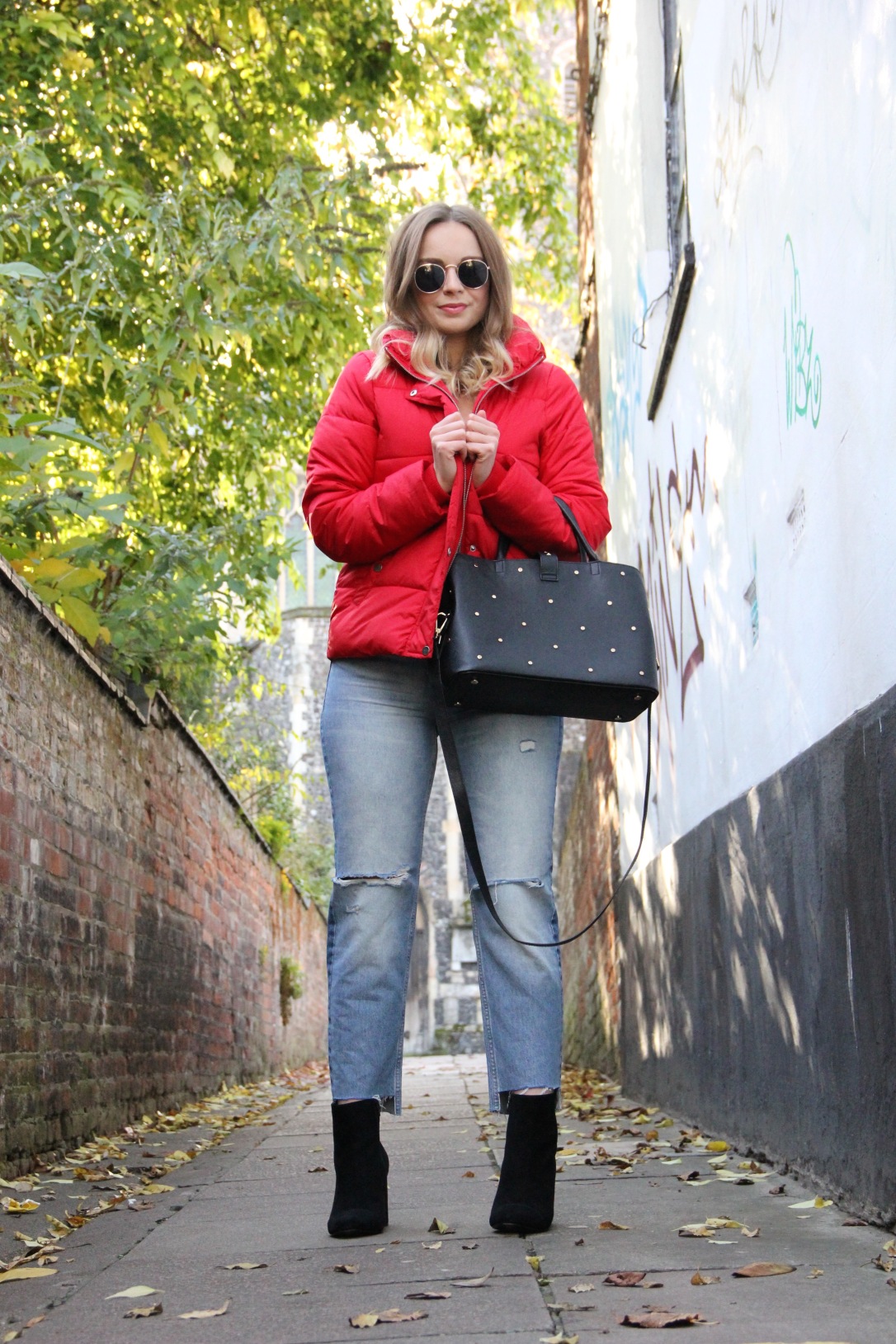 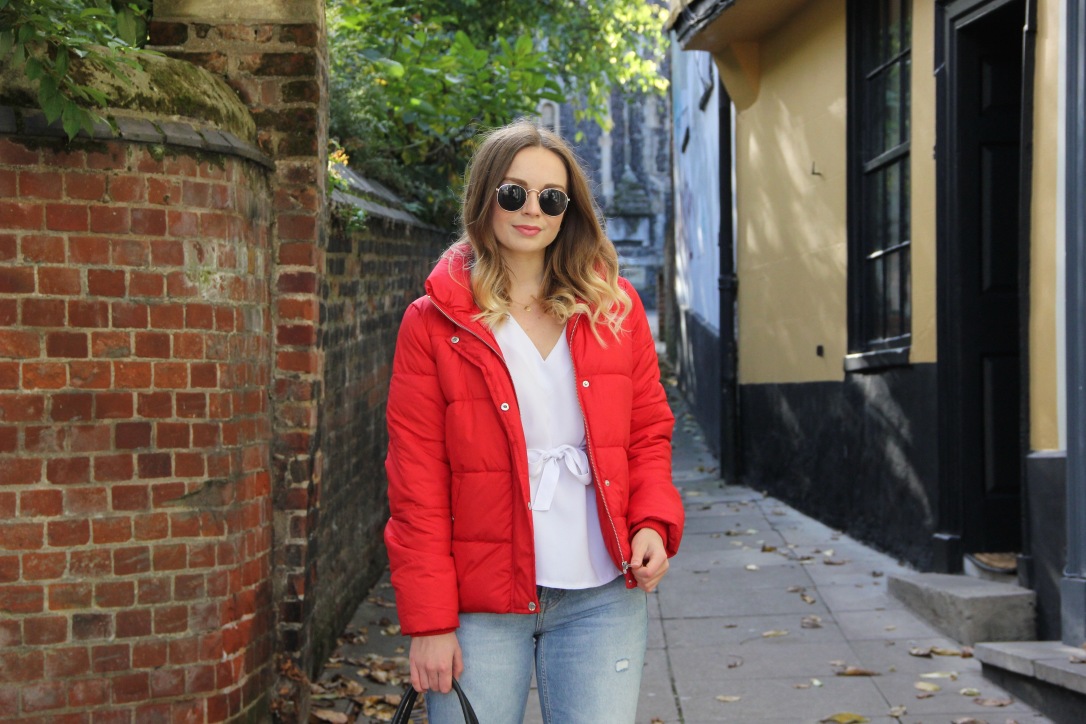 *C/O denotes an item which has been gifted to me. All styling, imagery and words are my own.

12 thoughts on “A red puffer jacket (and nothing more profound)”