It’s been a while since I’ve done a beauty post, so let’s talk skincare. I’ve been dipping in and out of the Superdrug Vitamin E range for a few years now, and have always been fairly impressed with most of the things I’ve tried, but since going cruelty-free this year they’ve been one of my first stops for new skincare. I would go so far as to say that I’ve become something of a connoisseur of this collection of products, so I thought I’d do what will probably be quite a mammoth post with some (very) mini reviews and an idea of what I think is worth trying from them.

On the whole, I’m a big fan of the range. It’s effective, it’s easy to get hold of, and the most expensive product of the lot is £4.99. £4.99! Preposterous, I know. They’re also cruelty free, so (in my opinion), a far better place to put your money than other high street skincare brands.

I’ve separated these up into three categories; essentials (things that I repurchase constantly and am never without), worth trying (things that I love or like from the range that I do repurchase or would repurchase – but I also try other brands or rotate them), and not for me (you guessed it…not for me. I didn’t hate any of these things, I just probably won’t buy them again and I’ve explained why for each). 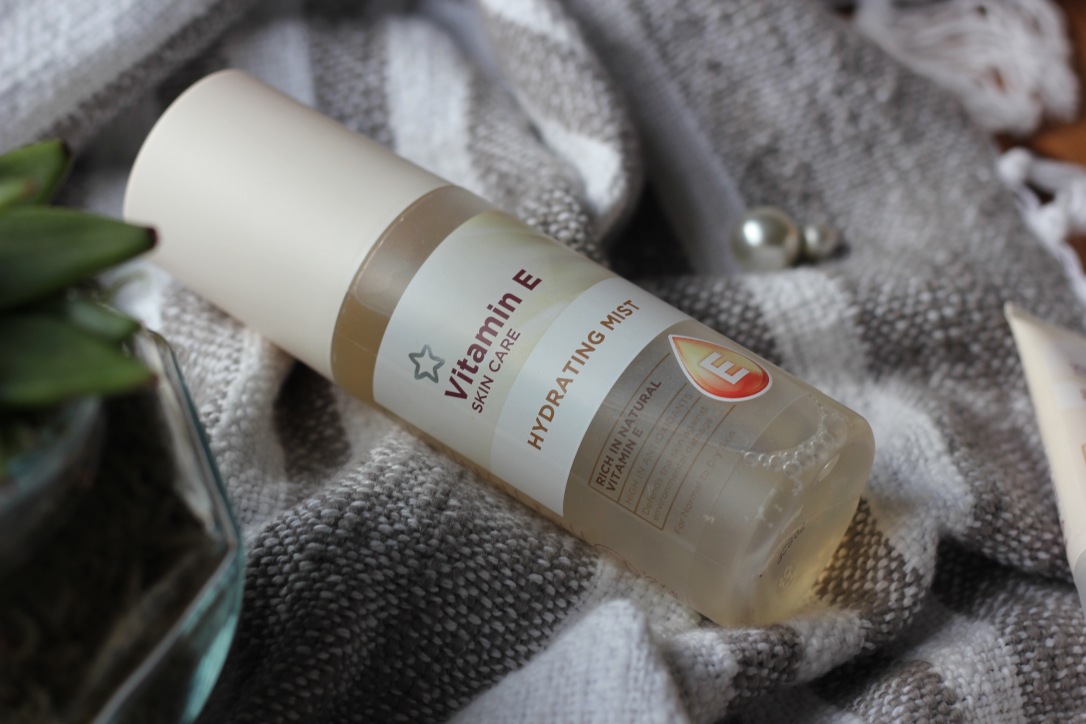 Superdrug Vitamin E Micellar Water, £2.99: When I went cruelty free I had to stop using both Bioderma and the Garnier micellar water, so I picked a bottle of this up in January when I was running out…never ended up buying anything else. I’ve been using it all year and have no plans to stop anytime soon. I use it every day, it takes make up off easily, it doesn’t sting the skin or eyes, and it’s £2.99. Winner winner.

Superdrug Vitamin E Hydrating Mist, £2.99: I bought this on a bit of a whim, having rarely included a toner in my skincare routine before, but it turns out I love it. It leaves my skin feeling so soft with no tight feeling, smells lovely, and absorbs well. It’s one that you can’t spray too close to your face because it’s not the finest of mists, but it’s super refreshing. I think I would actually love this just for the immediate ‘perked up’ feeling it gives, but it’s effective too; I can actually see a visible difference in oh-so-vague ‘glow’ (the kind of glow you want, not shiny or sweaty glow) when I use this frequently.

Superdrug Vitamin E Eye Cream, £2.99: Guys, I’ve started getting crows feet…so this year I decided to actually start using eye cream daily rather than just using it once every three months (and then proclaiming it pointless because it ‘makes no difference’). On first impressions this doesn’t feel like it’s going to be rich enough to do anything, but don’t be fooled; I’ve been using this daily for months and the difference in the skin around my eyes is visibly noticeable. It has a lovely soft texture, sinks in quickly, reduces puffiness and is super hydrating. 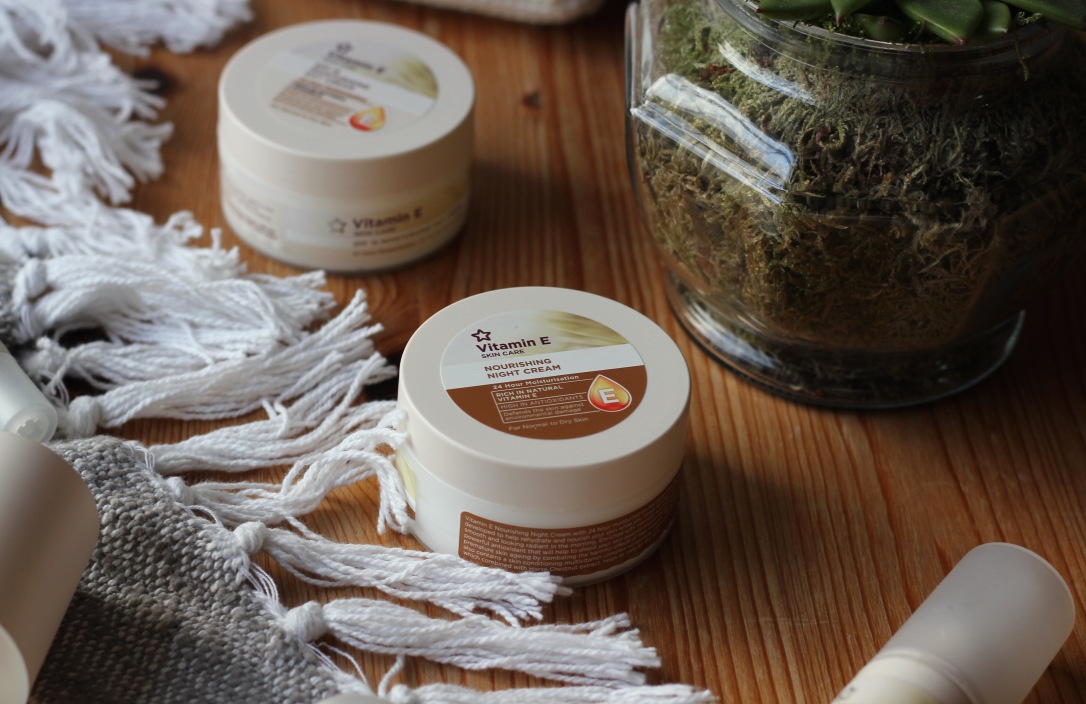 Superdrug Vitamin E SPF15 Moisturising Day Cream, £2.99: I wasn’t sure whether to put this and the next product in the essentials section, but ultimately decided that as I’m not 100% loyal to them, I would put them here. I do love this day cream though, and I’m never without it because it’s so dependable. It’s super hydrating, feels rich but absorbs easily, is paraben-free, isn’t greasy and contains spf 15. The quality and size of this three quid pot is quite amazing – it’s better than many high end day creams I’ve used and lasts for ages.

Superdrug Vitamin E Nourishing Night Cream, £2.99: Exactly the same as the above, this is a cracking night cream. It feels more rich than it’s daytime counterpart, as you would expect, and my skin always feels great when I wake up after using this. It’s also just £2.99, and I keep a pot of this one ‘in stock’ constantly too.

Superdrug Vitamin E Moisture Boost Facial Serum, £3.99: I’ve not used very many serums but I really like this. I’m still on my first bottle – another thing about this range is that they seem to last a while – and it’s very light, sinks in quickly, and makes my skin feel super soft. It’s not great under make up (tends to make it a little patchy), but I only use it at night so I don’t see that as a problem. Unless I try a serum I like more, I’ll repurchase this one.

Superdrug Vitamin E Hot Cloth Cleanser, £4.99: Clearly, this is supposed to be an own brand alternative to the Liz Earle Cleanse & Polish, but unlike C&P, this product is vegan. It doesn’t have the same luxe feel as the Liz Earle one but it is very effective, leaves the skin feeling super clean and fresh with no tight feeling, and is under a fiver for 200ml. It melts make up clean away – I have heard that it’s not great at removing heavy eye make up but as I usually remove make up with micellar water, and certainly would if I had on a lot of mascara and eyeshadow, I can’t attest to that. I’m on my third tube of this and rotate it with other cleansers. I know I can alway rely on this to do the job and not break me out! 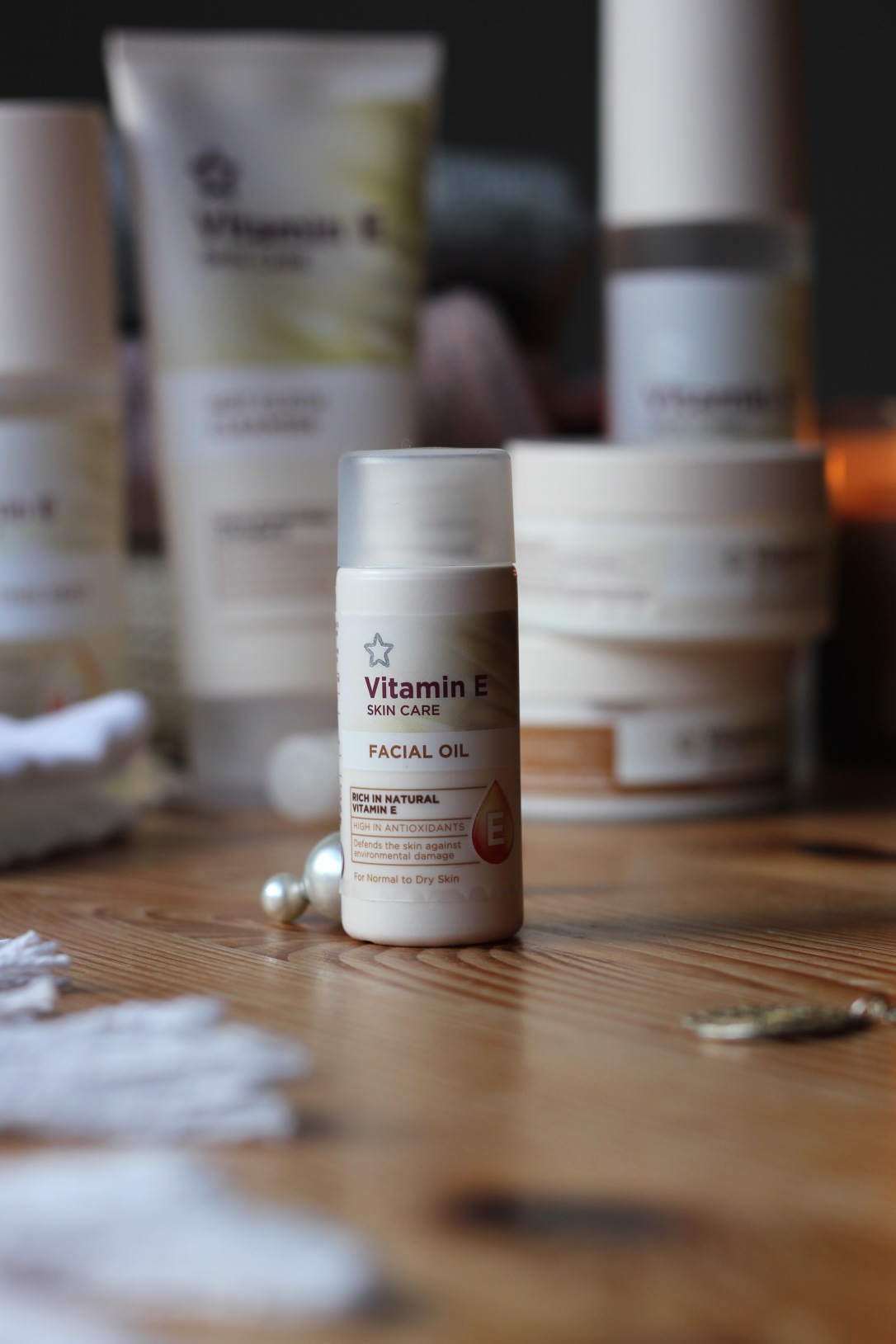 Superdrug Vitamin E Exfoliating Facial Scrub, £2.99: This is okay, but I didn’t feel it was particularly effective. It’s a super gentle exfoliator and suitable for regular use; if you have sensitive skin you may get on well with it, and I’m not against using it again, I just know I won’t be bothered with repurchasing it.

Superdrug Vitamin E Radiance Face Cream, £2.99: I didn’t get on well with this; it left my skin with a sort of greasy feeling, and it also has a little shimmer in it (presumably to give the ‘radiance’ element) which looked a bit strange and unnatural on my skin. It’s a no from me.

Superdrug Vitamin E Face Wipes, £2.99: These aren’t bad, but I don’t use face wipes because my skin hates them. If you’re a face wipe fan you may like – I’ve used them once and they are pretty gentle ones!

Superdrug Vitamin E Eye Make Up Remover, £2.99: I didn’t especially dislike this, but I don’t find it necessary in my skincare routine. I didn’t think it removed make up as quickly and as effectively as it could have done, especially considering micellar water can do that job. It’s very gentle so if you like a creamy make up remover it may be worth trying.

Superdrug Vitamin E Skin Oil, £2.99: I’m using this at the moment and I think I will use up the bottle (because I hate waste), but I will not repurchase. For me it’s a bit too oily…which may sound ridiculous but my skin still feels oily and greasy to the touch for ages after using this where it doesn’t with other facial oils. Perhaps one for super dry skin! I’ve heard good things about some of Superdrug’s other own brand oils, so I think I’ll try one of those next.

That leaves four of the Vitamin E facial skincare products (they do bodycare ones too, but I’m discounting those for now) that I’m yet to try; the Intense Moisture Cream, the Leave-on Mask, the Superbalm, and the Dual Phase Cleansing Oil. I suspect that at some point I will try them – I’ll add them into this post in the appropriate place as and when I do.

Have you tried anything from this range before? What did you think – and could you recommend any of the products above that I haven’t tried yet?