I feel I should really start by clarifying that hi, not pregnant, not referring to a daughter I just happen to have on the way. Last week, though, I was musing, as I often do, because I am a person who likes to muse a lot, quite often about nonsense but sometimes about actual, relevant issues. I was thinking that the women who are yet to be born – the women who will be born in a few years time, let’s say – will grow up in a time that is different to the one that we grew up in, and a very different one to the generations before us. And I wondered, if I were to have a daughter, which I can’t say for certain if I ever will, how that world will cause her to perceive herself and her worth.

Gender parity is still over 200 years away, according to the World Economic Forum’s 2017 Global Gender Gap Report. We’re making strides in the right direction and must make sure we keep it moving forward, so in the interests of being hopeful for where the future will take us, and to acknowledge the work that’s been done already as well as at this very moment, there are some things I hope will be perfectly clear and obvious to my imaginary daughter of tomorrow.

While they’re things that are perfectly clear and obvious to me too, it hasn’t necessarily always been that way. That isn’t because I’ve not had strong, intelligent women as role models, and it isn’t because any of the women in my life have taught me differently. It’s because we live in a society where being talked over, being pitted against other women, being told that being attractive to men is the most important thing to be, and countless other crappy daily occurrences that indicate otherwise are still alive and well, and they do have an impact. We also, of course, live in a world where much worse things are happening for women in different walks of life, where there is still have a long long way to go.

That feminism is not a dirty word

I am a feminist. There – it’s easy. And yet there still situations where such a statement generates eye rolls, mockery, or accusations of misandry – if it’s even said at all, since ‘I am a feminist’ is not something that everyone feels they identify with and not something everyone who does feels comfortable voicing out loud. But something as simple as vocalising your support of equality should be just as simple as vocalising your support of breathing: fundamental and obvious. We must continue to highlight this until the connotations which certain people associate with feminism are resigned to the past where they belong and the women (and men) of the next generation have no confusion over it’s meaning and universality.

Growing up white and British (aka with privilege that’s not afforded to everyone), I never fully understood that there was any question on this until I entered the world of work, and realised how much less weight is placed on a woman’s words than a man’s. It was then that I fully understood that yes, people are still telling women that what they have to say is unimportant and doesn’t deserve to be heard. We must keep making use of our voices and never allowing society to make us doubt their validity, and hope that one day the women of tomorrow or the next day or the next won’t have cause to doubt theirs either.

That she should fight for all women, not just those like her

Feminism is and has to be about more than just straight white cis women, but that’s not how it started and it’s definitely not how it’s always seen. Others who don’t benefit from the privilege that many of us do need the support of their fellow women and it’s important that – without speaking over them – we lend our voices and solidarity to them. We must be responsible for making ourselves and others in a position of privilege aware of intersectionality and the inequality of women around the world; undoubtedly, while progress for some may have been made for the next generation, it’s these women who will need all the support they can get.

For many of us growing up, the words ‘slut’, ‘slag’, and many more than I needn’t go into were common parlance. The sexual double standard is no doubt something we’re all familiar with, and let’s just say it’s all getting rather tiresome. A woman’s body is for her to do with what she will, and that extends to every other area of life too; a women’s physical self doesn’t exist purely to impress, be used by, or be judged by others. Dress it in what you want, wear bold make up or go bare faced and appreciate your body no matter what its size or shape – none of it is ‘better’ or ‘worse’ beyond how it makes you feel.

That her path is entirely her own choice

Motherhood, marriage, any step we take in life; they’re not a given, they’re a choice. I’m bored of the implication that a single woman simply has to be desperately seeking a partner, or a woman without children is selfish – and I’m also already bored with the newer, other side of the coin which paints a ‘stay at home mum’ as lazy, or a woman who has taken a route seen as ‘traditional’ as some kind of mindless idiot who was just blindly following what was expected of her. Can we not just accept that women can decide on their own path for themselves?! Let’s hope that in the future it’s clearer than ever for girls that whichever of the countless paths available they choose, that’s cool.

That she should challenge stereotypes

That other women are for lifting up, not tearing down

Words like ‘catty’ and ‘bitchy’ and phrases like ‘slagged off’ are reserved exclusively for women and foster the idea that women are in constant competition with one another; society and our media are oh-so-fond of perpetuating and encouraging this idea, and it must stop. As women we can prove just how wrong it is by raising each other up, celebrating the successes and achievements of other women and supporting members of the sisterhood, no matter what their background. 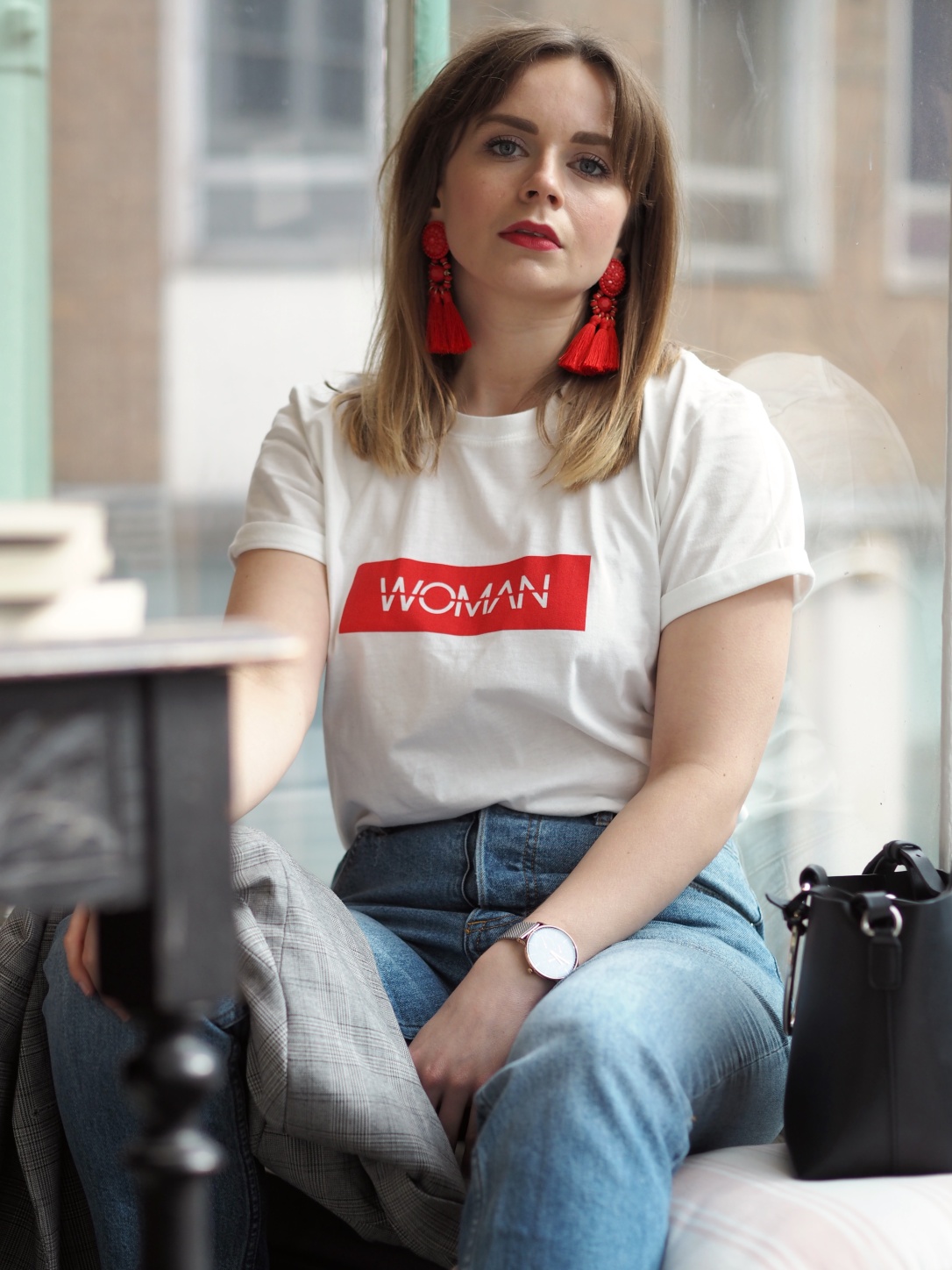 The t-shirt I’m wearing in these images is from Boohoo, and £5 from each purchase of it will be donated to the Wonder Foundation, a charity dedicated to empowering vulnerable women and girls around the world by helping them to access education. Education, as we know, is absolutely essential for progress. If you fancy making a simultaneous slogan tee purchase and charity donation, it’s available here, and there are sweaters available too. As I was gifted the t-shirt, I’ve made a separate donation to Wonder via their website.

11 thoughts on “The things my future daughter should have complete, unwavering belief in”