In case you haven’t noticed, there are a lot of retailers having their summer sales right now. This is great (unless you happen to have bought something at full price very recently which is now a lot cheaper) but I’ve had to ban myself from them because I realised that I turn into some kind of crazed monster, and crazed monster me has spent all the money. Ooops. Here is an accurate description of what happens to me in a sale, and hopefully you don’t think I’m an absolute lunatic by the end.

It begins innocently enough; with the idea to just nip in for five minutes and have a quick browse to see if anything good has one of those glorious 50% off stickers on it. So I start looking, moving through the rails in a logical order without missing any because naturally I need to comb the entire store (it’s not going to take 5 minutes). I see some things I like, they’re in the sale, I pick them up – it all seems to be going well.

That’s until I reach a section that looks like it might hold some gems because there’s someone in my way and COME ON LADY, WHY ARE YOU TAKING SO LONG. I’ve started to become irrationally annoyed with people for no reason, beginning with this poor woman who is literally just here doing the exact same thing as me. Well, how dare she?! Maybe she’s got the same taste in clothes as me. Is she going to pick up something that I want? She looks about the same size, and what if there’s only one? Is she going to steal all the good stuff?! The sale FOMO has begun and I turn a bit feral because suddenly I don’t think that elbowing people out of the way is such a bad thing to do after all.

My sense of pricing seems to have become seriously warped. I am suddenly convinced that anything over £25 is far, far too expensive for a dress. So has my sense of sizing. 2 sizes smaller than I would usually buy? That’s fine, I’ll probably just ‘squeeze into it’ (that’s never going to go well Soph). 2 sizes larger? Not a problem, it’ll probably be better oversized anyway right? My taste in clothes and any semblance of personal style has also gone out of the window here, because I’m desperately clutching things that I wouldn’t have picked up in a million years, but if they have one of those little red labels on, I’m determined to ‘make them work’.

It takes me several attempts to get to the changing room; a few times I would nearly make it there but ended up turning back because someone would walk past carrying something that I’d pondered over, and that would make me realise that I was wrong to put it back and I simply must have it too. I end up taking an armful of about 18 things in with me, and the trying on/narrowing down process begins.

An hour later – despite having only ‘popped in’ – I emerge feeling a mix of triumphant and guilty. I have a bag that’s bulging with god knows what and my bank account is probably in tears. Oh, and it’s probably my lunch break from work, so I have to do one of those walk/run things back to the office.

…and that, my friends, is pretty much how I ended up with the dress you see before you (as well as a whole host of other things I never knew I needed or even liked). A one shouldered navy striped number with random ties hanging off it all over the place? SIGN ME UP. I don’t think I would have ever bought this if I hadn’t lost the plot and started trying on the whole of Zara, but hopefully on this occasion my slightly animalistic approach to a sale has paid off. I paired it with my gold toed trainers and a bag from a charity shop for these photos, and I actually felt great about this outfit. Oh and FYI, the summer sales are fantastic this year, so seriously make sure you have a look. Just maybe don’t shop them like I did. 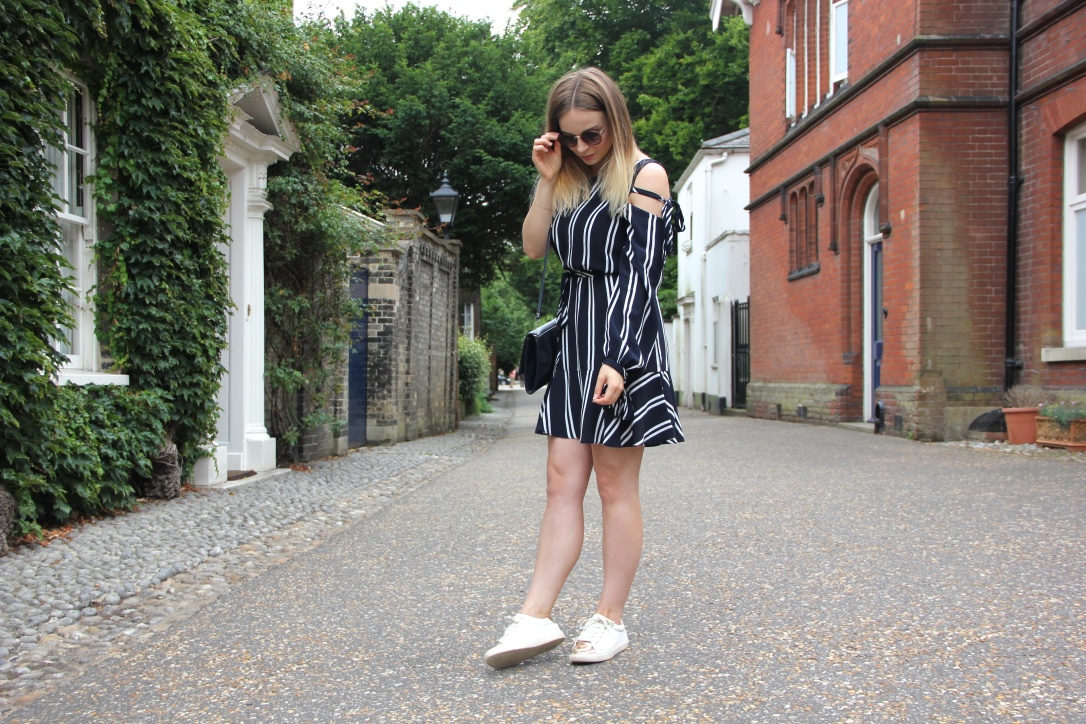 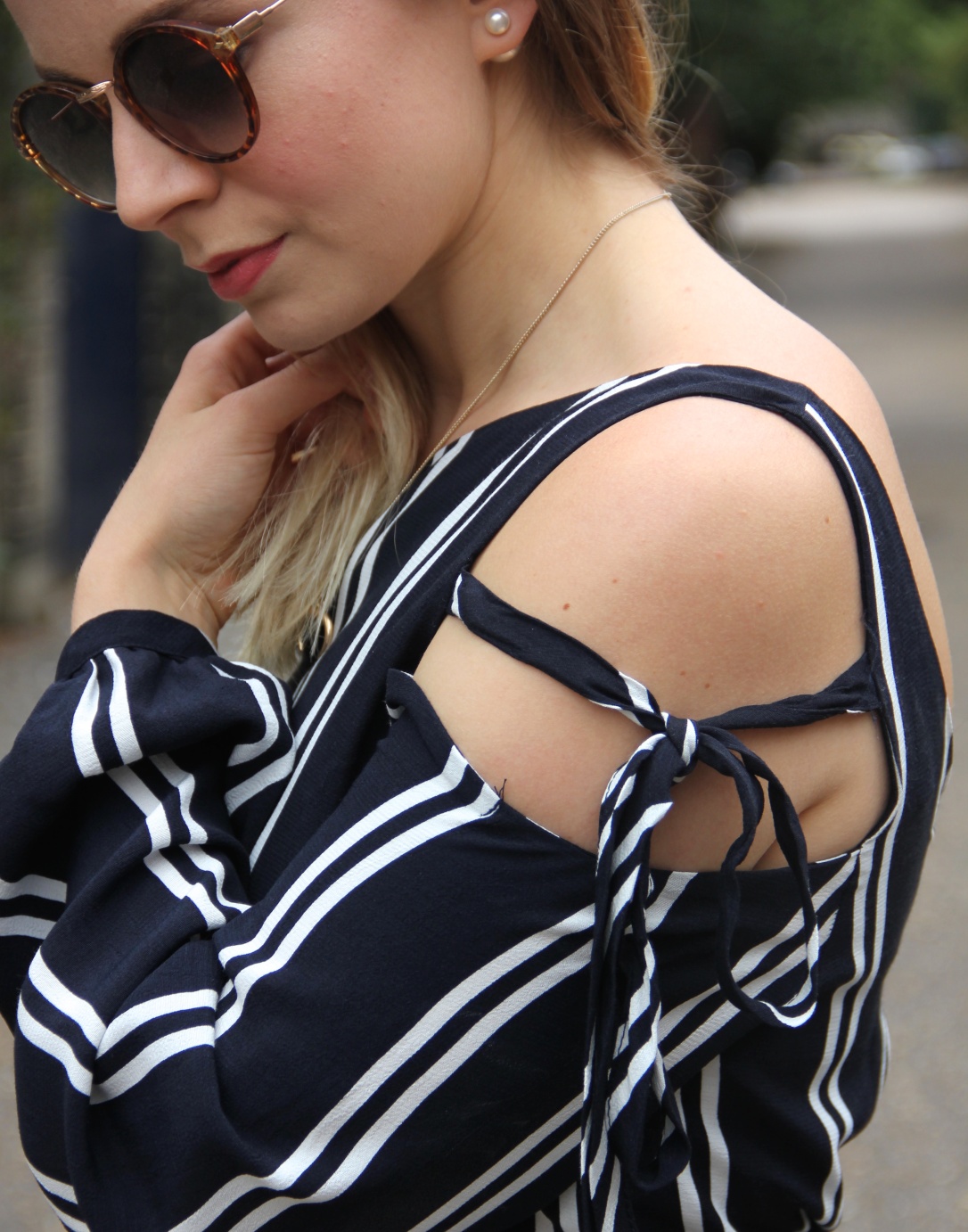 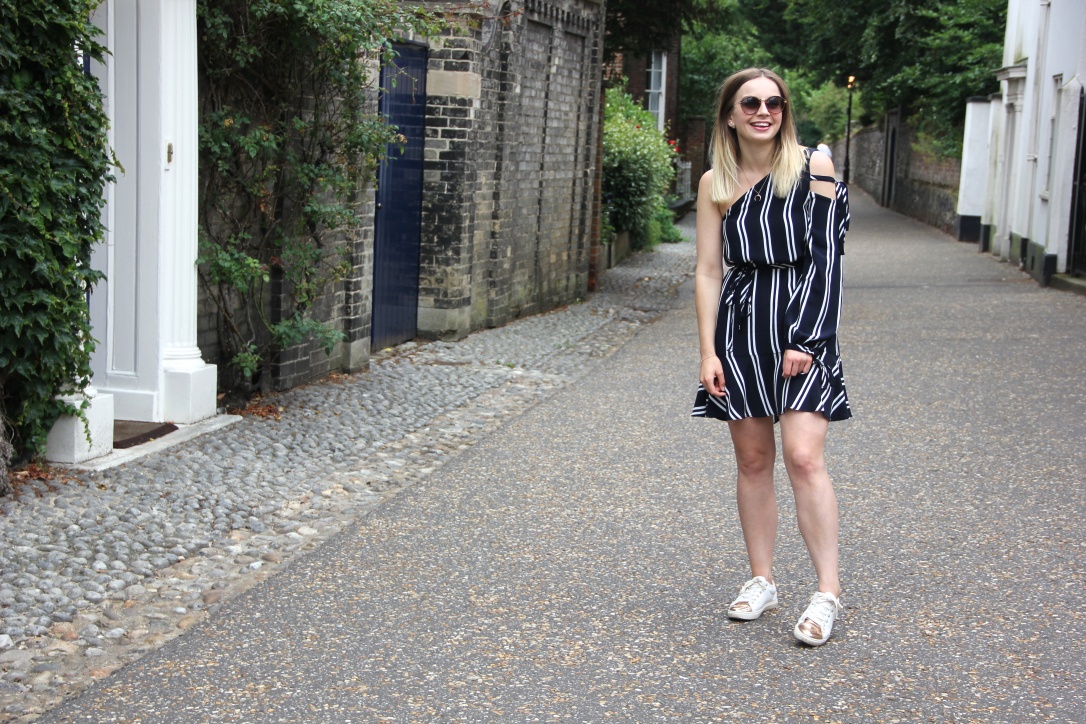