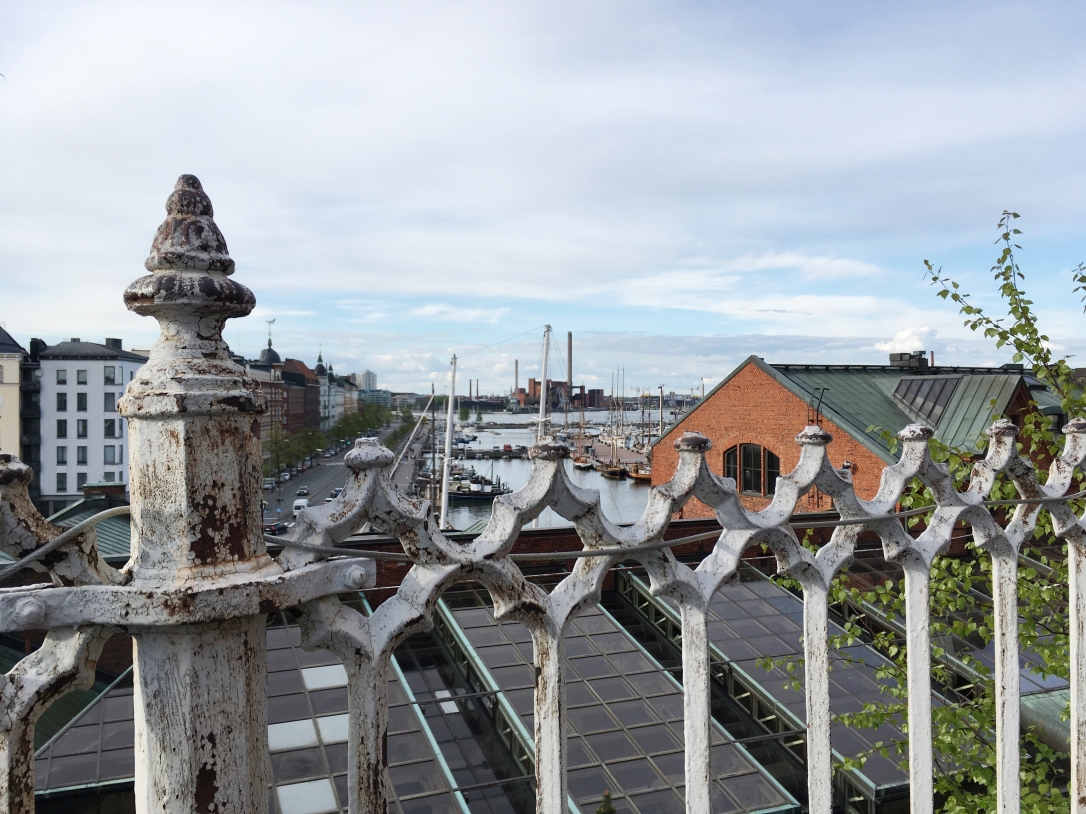 If you failed to notice from the influx of travel spam over on my Instagram, I went on a little trip recently. Our journey began in Helsinki for a family wedding, but we managed to get a lot of exploring done either side of the big day itself.

This was my first trip to Finland and what struck me immediately was the feel of the place. Helsinki for me was full of chilled out, friendly vibes. In some areas in particular it’s cooler and trendier than I’ll ever be but not at all in a pretentious way. It’s also probably the calmest capital city I’ve ever been to, with comparatively little traffic, both on the roads and on the pavements. Wide streets mean it doesn’t feel too built up – even in its more built up areas – and the gorgeous islands, pretty buildings and plentiful green spaces contribute to both the laid back atmosphere and a sense of vibrancy. 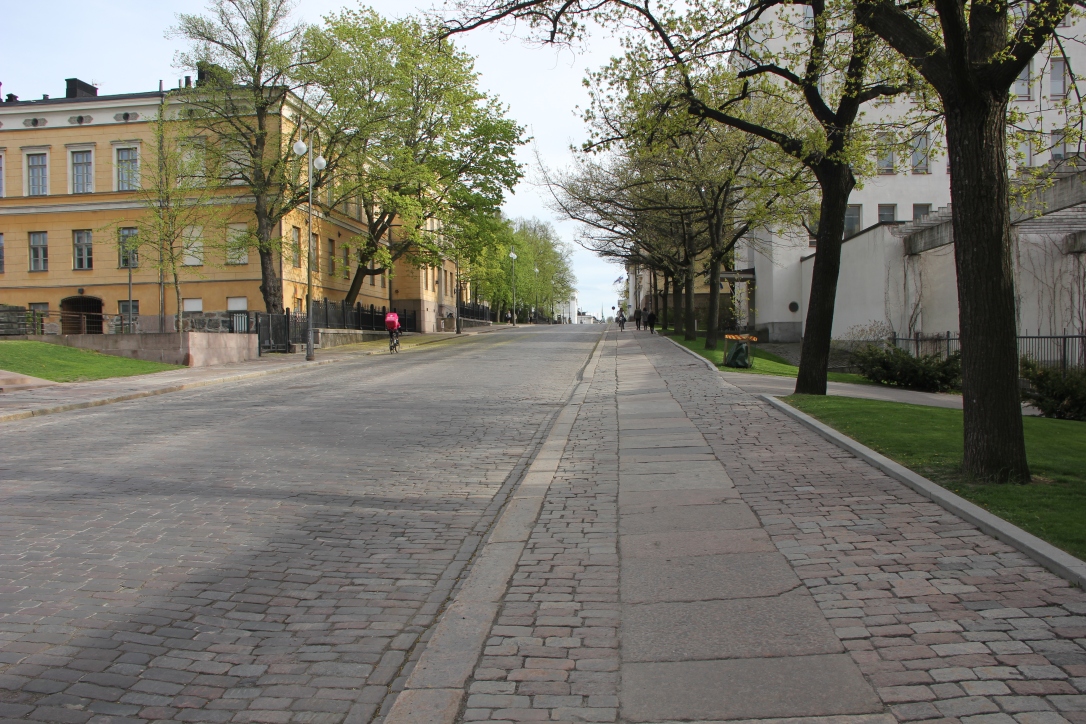 I saw one tripadvisor user say on a review of the Helsinki tram  ‘you know there is nothing to do in Helsinki when this is one of the top 10 things to do’. In a way, I nearly understand what that person meant; it’s not a city stuffed with attractions and big sights. But that’s not to say that there isn’t anything to do because there really is – if you prefer to be action packed every second of the day then just spend less time there (two nights would be fine I imagine). However, there’s easily enough to fill a long weekend if you stop focusing on ticking off attractions and just enjoy getting to know the place. Here are some of the things we got up to, as well as a couple that we didn’t manage fit in:

Easily my favourite way to explore just about any city I can think of, we did a lot of walking and stumbled upon many of the key sights over three hours when we first arrived. Helsinki is fairly compact, so unless you really have an issue with it or are just plain lazy, walking is the perfect way to reach a lot of what you might want to see. We were staying in Kallio – a bohemian area which in itself is definitely worth a wander round (because we’re such trendy kids you know) – and walked via the Botanical gardens into the centre, admiring the mix of architecture and getting a feel for the place. We ended up making a big loop via Helsinki Cathedral, the Uspenskin cathedral, the Esplanade, the old market square and the harbour, so managed to see a lot of different bits in a relatively short timeframe and got the bonus of walking the pretty streets between them too. 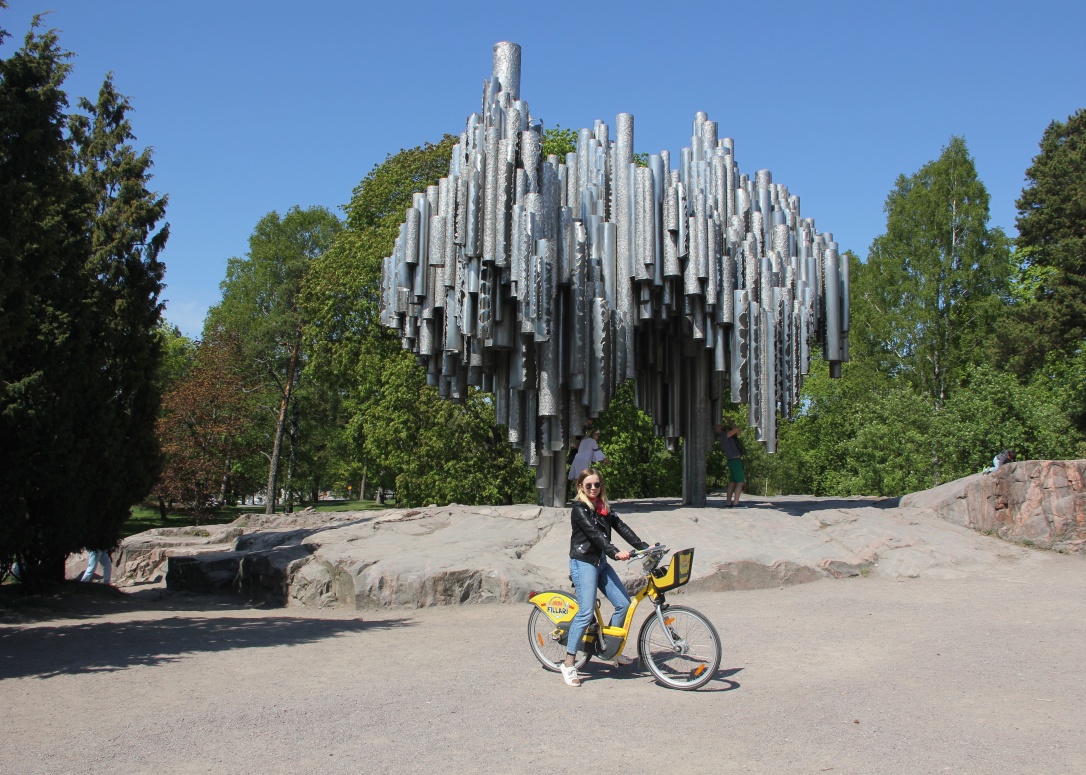 Helsinki is a great city for cycling (again, because it’s calm) and has cycle paths clearly marked throughout. If you don’t fancy walking or something you want to visit is just a bit too far, make use of the citybikes – if you’re British, these are basically Boris bikes but without the associations with the ridiculous and rather unsavoury Tory clown. You just register as a user online, pay $5 for the day to get your unlocking code and dock it every half an hour to ensure you don’t have to pay any more (as they are meant for commuting). The docking stations are frequent and easy to find. We cycled to Sibelius Park to see the monument and then from the seafront promenade next to it all the way around to the other side of Helsinki along the coast, and it was an absolutely lovely way to see the areas of the city that were a little out of reach on foot, with plenty of views along the way.

We also heard that one of the best places to cycle is Seurasaari, an island which houses an open air museum. Although we didn’t cycle there, I can tell you that it’s great and would be a fantastic place to take a little ride to, and that’s because the wedding we were in Finland for was held in the church on the island – it was beautiful and so unique! 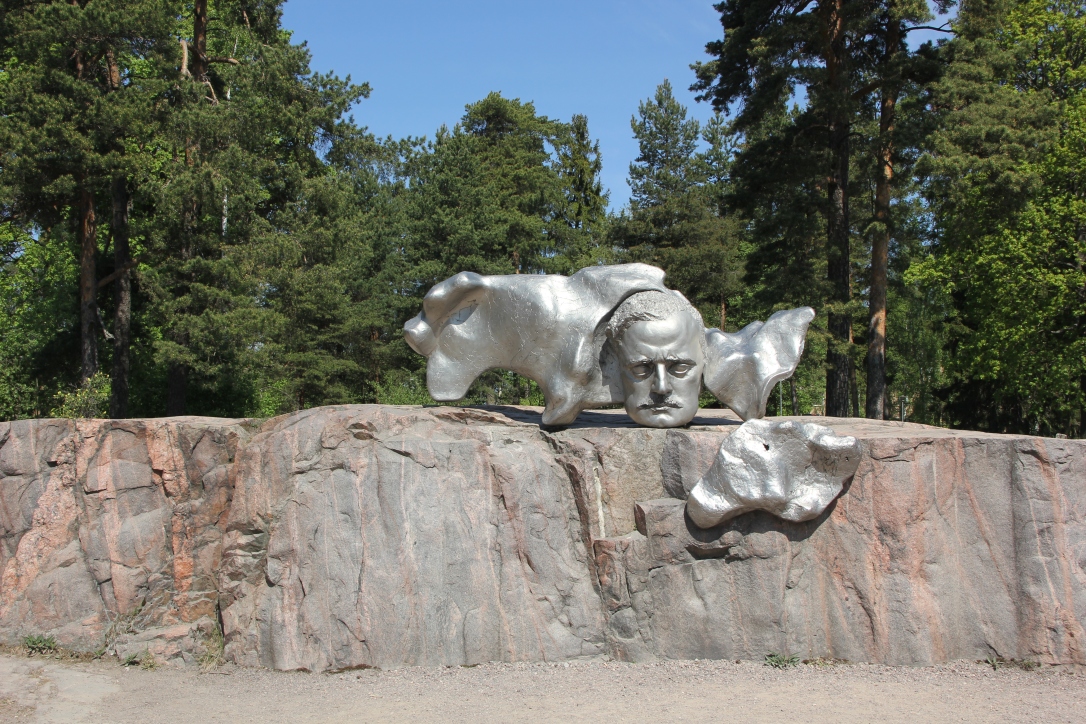 We didn’t actually do this because we didn’t have the time, but apparently nothing quite says Finland like a Finnish sauna, and there are a fair few public saunas to choose from (heard good things about Sauna Hermanni!). From what I can gather nudity is optional (I think its traditional to go naked, but you’re not obligated, so no problem with keeping swimwear on or covering up, just be aware that not everyone will be) and it’s all about cleansing body and mind.

My oh my, I ate some delicious things in Helsinki. With a burgeoning food scene and plenty of options you may as well take your time and enjoy eating as an activity in itself, whether that’s with a trendy brunch, a reindeer burger (not for me…) or by sampling some modern Finnish cooking. Our days were quite packed with wedding things going on as well so we grabbed a lot of food on the go, but there are a growing number of vegan friendly eateries and I had some of the most delicious meals of the whole trip in the city, so I do have a couple of places to tell you about. I would definitely recommend Bar Loosister for incredible pizzas (they even do several vegan ones!) and Roots Helsinki for incredible breakfasts, lunches and cake. 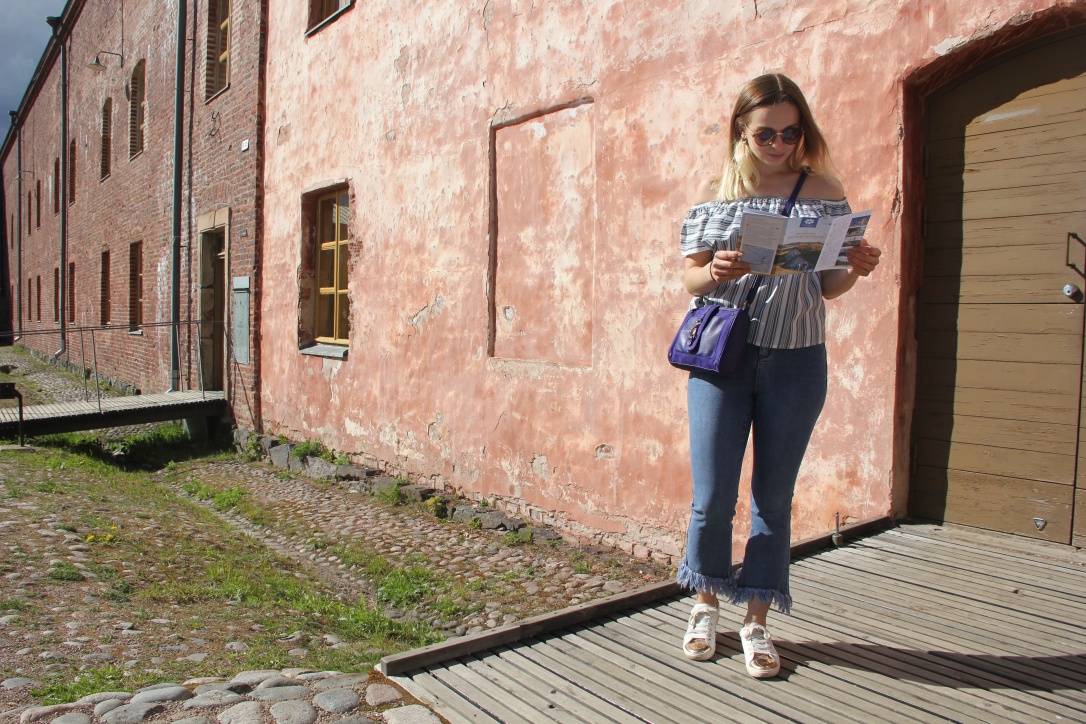 Islands just off the coast of Helsinki are easily and affordably reached by boat. The most famous of these and one of Finland’s top attractions is Suomenlinna, a sea fortress and UNESCO world heritage site. HSL Ferries run from early morning right through until after midnight to Suomenlinna, but we decided to get another island in there (of course) so opted for a JT Line island hopping ticket on our first full day. This included travel between Helsinki market square, Lonna (a tiny island that we were going to get off at but decided not to when we saw just how diddy it was), Vallisaari and Suomenlinna.

Vallisaari and neighbouring Kuninkaansaari are connected by a bridge and offer a nice little walk; they’re fairly rugged and wild in parts but for the most part there’s a walking trail so it’s not a serious hike. There are great views at various points (particularly over Suomenlinna) and the landscape is rich in biodiversity, according to all the signs. And I might not know the full extent of that but what I do know is that we saw a snake, guys. A snake. It was so exciting. Suomenlinna is much more of a tourist attraction with guided tours and points of interest. There were some beautiful buildings (look at the pink one below!), cannons along the fortress walls, and a huge and impressive operational dry dock. A must for History buffs but also just a really cool place to visit.

Taking a stupid number of photos on Vallisaari Island 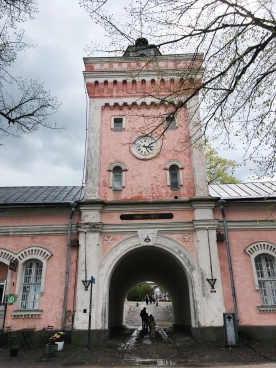 If you’re pushed for time or just prefer not to explore solo, take a tour! There’s a hop-on/hop-off bus, a Helsinki boat tour and many more, and they’re a really time-effective way to see the city. 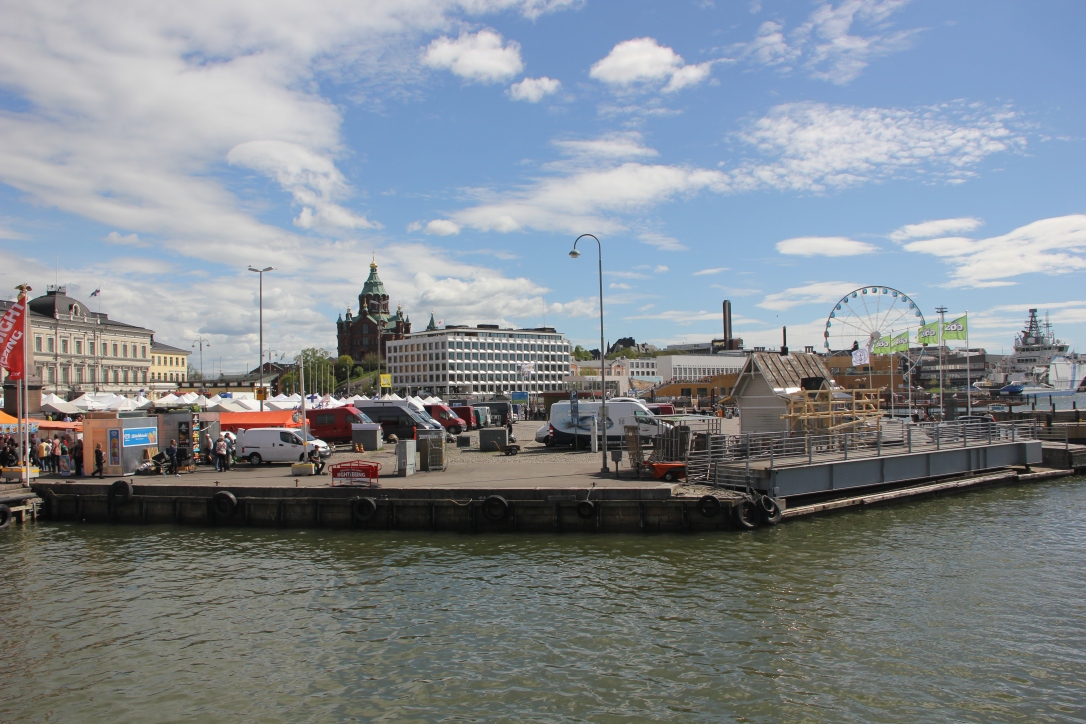 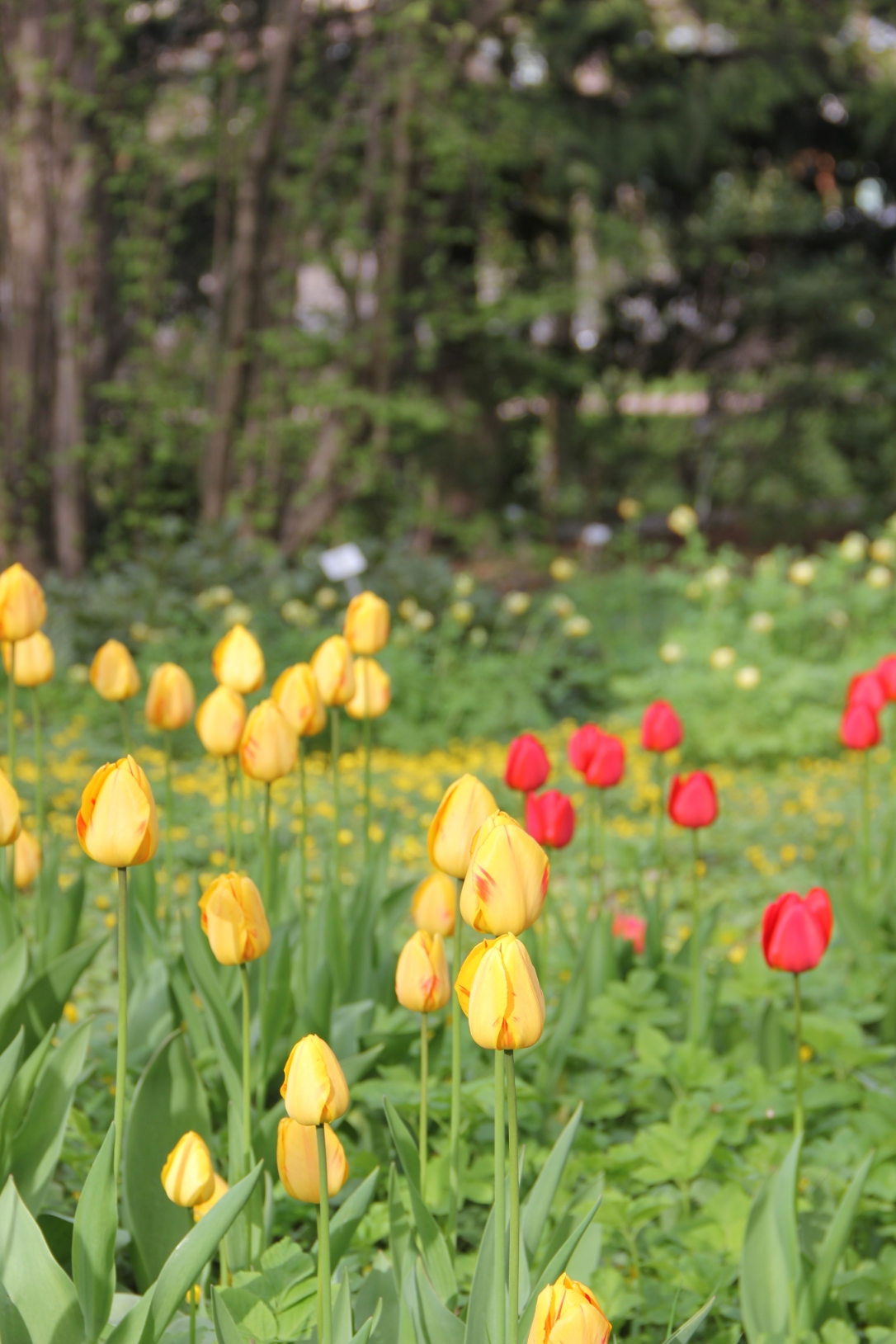 Day excursion to Estonia or make it a multi-destination trip

I wasn’t going to include this at first because what I’m trying to stress is that there is plenty to do in Helsinki. However, I am all about seeing as many places as possible, so it’s worth noting that Talinn is in easy reach of the city, so you could hop on a boat over there as a day trip if you so desire. Alternatively, if you have the time then make it a trip with multiple stops; Stockholm and St Petersburg are both just an overnight cruise away. We went for Stockholm and – bonus – were treated to lovely views of Helsinki while leaving and a gorgeous sunrise over the islands from the ferry. 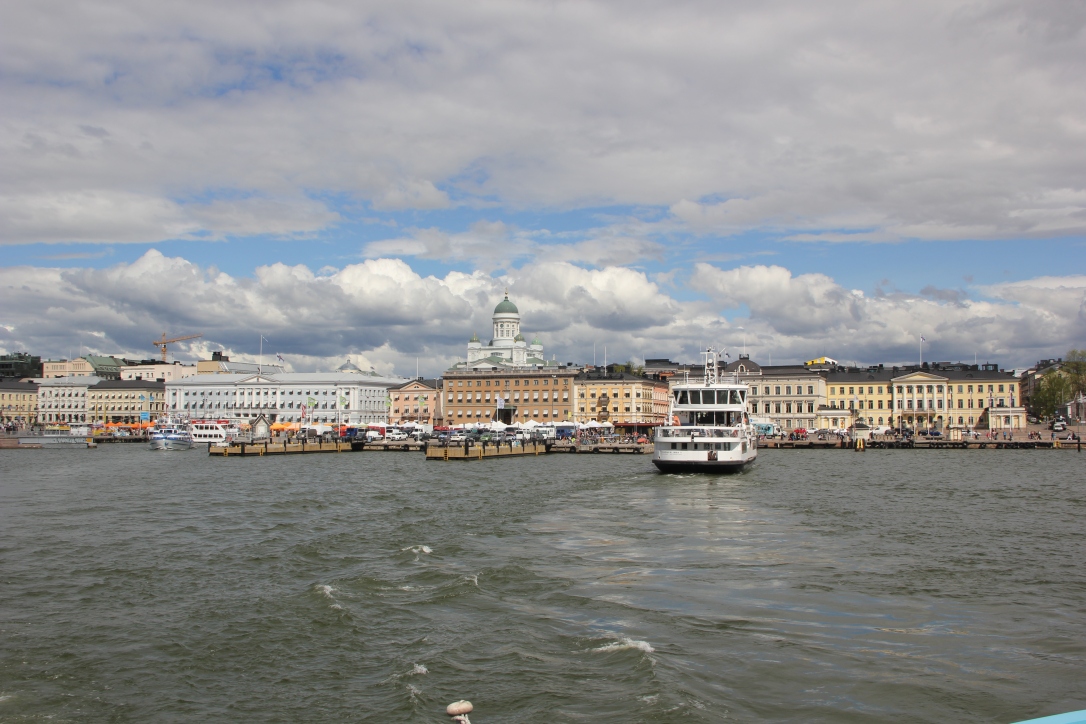 So there we have it – my first post from our trip and a massively long one at that! I really enjoyed our first taste of Finland getting to know Helsinki a little. Plus I’m still dreaming of that pizza…

If you’re interested in more travel, posts on Stockholm, Gothenburg, Oslo, Bergen and the Norway in a Nutshell trip including the Flam railway are coming soon!

16 thoughts on “Ways to spend a weekend in Helsinki”